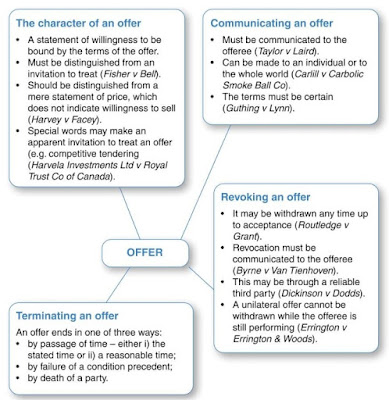 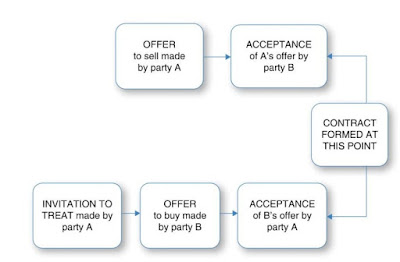 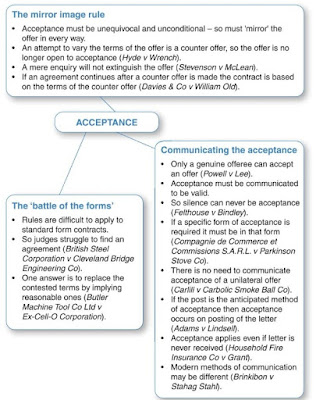 (Pharmaceutical Society of Great Britain v Boots Cash Chemists
Ltd (1953)).
• The same applies to goods displayed in shop windows (Fisher v Bell (1961)) on whether display of a flick knife was unlawful under the Offensive Act.
Advertisements — the advertisement is the invitation to which a person responds by making an Offer to buy (Partridge v Crittenden (1968)).
Catalogues, as for auctions, so a lot can be withdrawn without any consequences (Harris v Nickerson (1873)).
Invitations to council tenants to buy their council houses and flats
(Gibson v Manchester City Council (1979)).
Tenders to provide goods or services — invitations to suppliers to offer a particular price for which they will provide the goods or services; the party inviting bids then selects a bid (Spencer v Harding
(1870)).
• Mere statement of price — merely stating an acceptable price does not make it an offer to sell; the other party must still offer to buy at the price (Harvey v Facey (1893)).
In all cases the significance of the invitation to treat is that the person responding to it has not accepted an offer, so their action does not at that point create a binding contract.
Sometimes precise wording is more important than context. While something seems more like an invitation to treat it may in fact have the effect of an offer, so that a positive response by the other party may well lead to a contract being formed. The wording limits the people capable of respondlng.

a) Unilateral offers (i.e. contained in advertisements, and otherwise seen as invitations to treat (e.g. rewards). An offeree is already defined in the reward (the person who complies with its terms) so
that the person need not make any offer to comply; they merely carryout the stated task (Carlill v Carbolic Smoke Ball co (1893)).
b) A statement Of price made during negotiations indicating that an offer exists (Bigg v Boyd Gibbins (1971)).
c) Competitive tendering, i.e. stating that the contract will be given to the bidder making the highest (or lowest) bid, in which case only that person can form the contract, and they accept by making the
highest or lowest bid (Harvela Investments Ltd v Royal Trust Co of Canada (1985)). Competitive tendering also means that parties entering bids may have them considered (Blackpool)l & Fylde Aero
Club v Blackpool Borough Council (1990)).

A valid offer must be communicated to the offeree. It would be unfair for a person to be bound by an offer of which (s)he had no knowledge (Taylor v Laird (1856)). so the offeree must have clear knowledge Of the existence Of an
Offer for it to be enforceable (Inland Revenue Commissioners v Fry (2001)).
An offer can be made to one individual, but also to the whole world, when the offer can be accepted by any party who had genuine notice of it (C.arlill v Carbolic Smoke Ball Co (1893)).
The terms of the offer must be certain. The parties must know in advance what they are contracting over, so any vague words may invalidate the agreement (Guthing v Lynn ( 1831)).

Revocation refers to the withdrawal of an offer. An offeror may withdraw the offer any rime before the offeree has accepted it (Routledge v Grant (1828)). It would unfair to expect the offeror to wait indefinitely for an offeree's response.
An offer made in response to an invitation to treat may also be withdrawn if not yet accepted (Payne v Cave (1789)). To be valid, a revocation of an offer must be communicated to the offeree. It would also be unfair for a legitimate offeree to lose the chance to enter a contract because the offer was withdrawn without warning (Byrne v Van Tienhoven (1880)).
The revocation need not be made personally. It can be made by a reliable third party (i.e. one known to both parties so that the offeree may rely on the revocation (Dickinson v Dodds (1876)).
A unilateral offer cannot be withdrawn if the offeree is in the act of performing, since acceptance and performance are one and the samething (Errington v Errington and Woods ( 1952)).

An offer may come to an end because it has been accepted, in which case a contract is formed.
Other than this an Offer can end in one Of three ways:
a) By passage of time: because the time set for acceptance has passed; because a 'reasonable time' has passed — it would be unfair to expect an offeror to indefinitely keep open an offer for sale of
perishable goods. What is a 'reasonable time' is thus a question of fact in each case (Ramsgate Victoria Hotel v Montefiore (1866)).

b) By failing to comply with a condition precedent (Financings v Stimson (1962)) (e.g. an offer of employment made subject to production of a satisfactory reference or medical report).